Beneath The Waters Of Llyn Coch 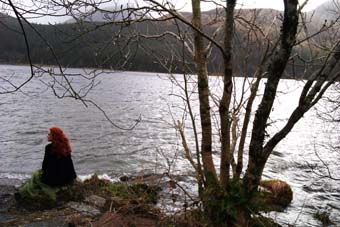 A beautiful location to film in

Beneath The Waters Of Llyn Coch is a fantasy story based on an old Welsh myth of The Fairy-Bride.  It was filmed as part of a new series, Legends Of Old which will retell traditional myths and legends from around these fair isles.

We filmed in the beautiful Welsh countryside near to Beddgelert in April 2013.  Despite it being well into springtime, it was mighty cold!  Apparently on the recce the lake was so calm and peaceful, unfortunately for us, when we came to film it, the wind was howling and the sky threatening.  Ok, so it put back our schedule a little, but call-sheets will always be changed and there’s nothing anyone can do about the weather.  In my opinion, it just made the lake seem a lot more atmospheric. 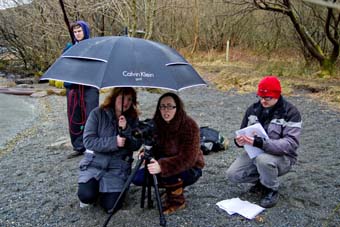 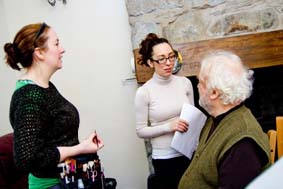 discussing the days filming ahead

My biggest challenge on this film was definitely the underwater make up.  Having never done this before, I did some research and tested a few products on myself way before the shoot so I knew I had the right stuff in my kit.  Particularly useful was Illamasqua’s Liquid Metal palette, but we were also given a great selection of make up from MAC which proved very useful.  Thankfully we had a great actress who managed to last several hours in the water without once rubbing her eyes.  This made my job a whole lot easier.

A lovely shot – particularly useful for the continuity of her hair

Nevertheless, the same make up had to be repeated time and time again, with weeks inbetween sometimes.  It is for this reason I drum it into my students – take lots of pictures! They don’t have to be top quality, they don’t have to be beautifully framed, but they do need to show the details of the hair and make up.

This entry was posted in Past Projects, Short Films and tagged Hair, Illamasqua, MAC. Bookmark the permalink.