In January I went a bit overboard in the Illamasqua sale.  It’s hard not to really, their sales are always pretty generous and there’s some real gems to be found.  One of the things I was most excited about was a Liquid Metal Palette* containing 4 creams: stoic (green), solstice (gold), superior (blue) and resolute (red).

I’m not generally a fan of cream eyeshadows, I’ve yet to be convinced that they’re as good as powders, however the pigments are so strong and beautiful in Illamasqua’s products and the price was so reasonable that it was too difficult to not buy it.  I’d read other reviews whilst waiting for delivery and most of them said they found the creams pretty difficult to work with.  Within minutes of application they crease in the eye socket and all your hard work blending and softening is ruined. 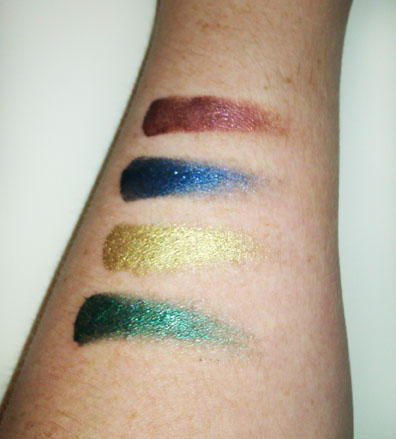 How the colours look on skin – beautiful! 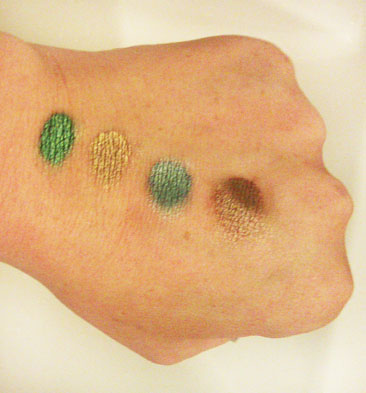 I have to confess I had exactly the same troubles myself.  And this is the crux of the matter.  As pigmented, smooth and beautiful as these cream pigments are, they should not really be used alone on the eyes.  Just as you would set a foundation with powder, these should also be set, with powder eyeshadow.  This has 2 benefits.  Firstly, the powder sets the cream minimising creasing and, secondly, the creams illuminate the powder, giving it a more 3-dimensional look.  That’s not just sales patter there – it really does.  Go on, try layering different coloured eyeshadows over different creams.  See?

Much as I wanted to love this palette, I found myself putting it at the bottom of my kit and forgetting about it until….

I was asked to do an underwater photoshoot!

After several hours underwater Liquid Metal still holds up. (I just had to remind the actress not to rub her eyes!)

‘Excellent’ I thought, ‘another first for me.’  Second thoughts were, ‘Eeeek!  How am I going to do green fairy make up for underwater, that will last, be able to be replicated for future continuity (the shoot was part of a short film) and will also look good once the green fairy exits the water?’  And this is when my attention turned back to Liquid Metal.  It’s great for underwater, stays in place, holds it’s pigment when all powders have washed away.  I’d have been hard pushed to complete this film without it and for that alone, it was worth the investment.

*Although the palette is now discontinued, individual Liquid Metal colours are still available.

This entry was posted in Product Reviews and tagged Beneath The Waters Of Llyn Coch, Eyeshadow, Illamasqua. Bookmark the permalink.