The first week of June I spent walking across Scotland with my Dad. I don’t know why I’ve suddenly decided to do these walking challenges, such as firewalking in March, but all suggestions welcome, I quite like the idea of the ridiculous.

Anyway, upon arriving in Inverness, shattered, midge bitten and sunburnt I was slightly disorientated to receive a phone call from Maya telling me Violet City was back on and this time we were going to get it finished. I’ve never met Maya before, nor heard of her so certainly wasn’t expecting that call. The day after arriving back in Liverpool, we began filming again. This film has been in production for almost 2 years and so, unfortunately the original AD, DOP, camera guys and producer were no longer able to work on it. It was quite bizarre to turn up on a film set I know so well (the whole film is on green screen, therefore, only one set) with a script I know so well and have an entirely different crew. Of the original crew who started back in August 2010, there remains only John (director) Dave (writer) and me. As we’ve filmed on green screen, we had previously filmed all the main action. This block was just for the extras, who will be layered into the final edit in post production, therefore it’s a completely different cast also. Everything is the same but different. Very strange. 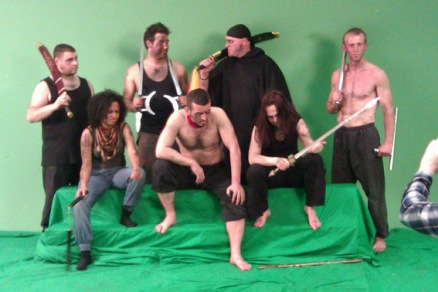 the jackals spoiling for a fight

We had a couple of days of just filming the aristos (rich toffs), a couple of days of just jackals (street fighters), a few days of ravens and lizards (guards) and a whole week of empusa (ethereal monsters). Perhaps the best two days was in the final week, when Jay, the fight coordinator brought in some martial artists, some boxers and some actors so create a series of brawls. These were the jackals, who are filthy street thugs, covered in tattoos. After my painstaking application of all the tattoos, covering faces, arms, torsos and backs, they lasted about 5 minutes due to the physical nature of the scenes. I quite enjoyed sitting behind the camera watching men fight for hours on end. At various points I would dive in with my bruise wheel or bottle of blood, adding or removing sweat as required. The sweatier and dirtier they got the more effective the shots looked. This was quite a way to finish the shoot!

Two days later we had our wrap party. Ok, so we’ve already had several wrap parties over the last 2 years, but this is a film unlike any other and I think it’s perfectly acceptable to have 4 wrap parties. It will still be a while before VC is ready for release. Backgrounds have to be designed, layers of actions have to be compiled and the ADR needs to be done. But, for the time being at least, my work here is done.

This entry was posted in The Monthly Round Up and tagged Blood, Violet City. Bookmark the permalink.